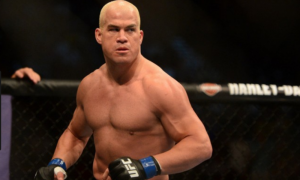 “On November 24th, I will show my fans my skill and ferocity in the cage once again,” claims Tito Ortiz.

LOS ANGELES, CA, UNITED STATES, October 31, 2018 /EINPresswire.com/ — Tito Ortiz (19-21-1), former light heavyweight champion, is preparing with an unmatched ferocity for his upcoming fight with Chuck Lidell (21-8) on November 24th, 2018. The fight will be their third fight since 2004, and a chance at redemption that Ortiz has been dying to get.

“I have been waiting a long time to get redemption against Chuck Liddell,” states Ortiz, “and now I finally have that chance. The last 12 weeks I have been working 3 times a day, 6 days a week. I have 4 more weeks to go and I can’t wait to get my chance to shine.”

In a story that seems fit for a Hollywood biopic, Ortiz and Liddell, long-time rivals, had their first match in Las Vegas, Nevada in April 2004. Liddell defeated Ortiz with a knockout punch in round two of the fight. Their second match took place again in Las Vegas, Nevada in December 2006. This time, Liddell beat Ortiz in round three with a technical knockout (TKO). The upcoming match on November 24th will be the first time Liddell steps into the ring in eight years. As for Ortiz, this will be his first right in nearly two years, but the mixed martial arts fighter says that he feels ready for the challenge.

“I’m thankful for Oscar De La Hoya promoting this fight and Chuck for calling me out wanting a rematch,” explains Ortiz. “On November 24th, I will show Chuck and my fans my skill and ferocity in the cage once again.”

Critics to the match state that a lot of things could go wrong with the fight, considering the advanced age of the two fighters. After all, Tito Ortiz is 43 years old, and Chuck Liddell is 48. Ortiz hasn’t received the memo, however, still training with the intensity of a man in his prime.

His training sessions include running, kickboxing, sparring, and wrestling. He only drinks water and Gatorade, and makes sure to avoid fried foods. He also follows a strict high-protein, low-carb, and low-sugar diet. Despite an illustrious career and numerous injuries, Ortiz claims that he’s in the best shape he’s ever been in.

“This will be a war,” predicts Ortiz. “and I’m ready for anything that Chuck Liddell throws my way.”