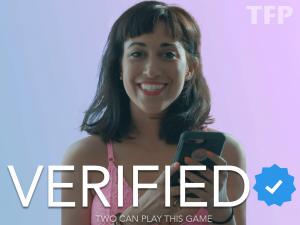 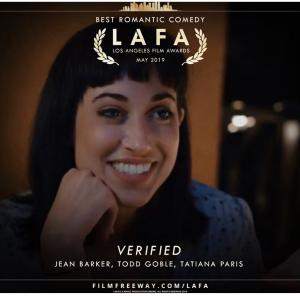 Comedy is tragedy mixed with surprise and MEGAN NAGER knows how to simultaneously love and mock the world she lives in and the LA life that many dream-seekers lead.”
— Jean Barker, award-winning film director, and director of Verified.

Verified tells the story of a millennial woman dumped by her long-time boyfriend for an Instagram model. In order to win him back, she makes the dramatic decision to change herself to fit the type of girl he dumped her for – an Instagram model. The series offers real life commentary on the dangerous effects of social media on self-confidence and beauty standards. The series was directed by award-winning director, Jean Barker, Todd Goble and Tatiana Paris. It stars actors Megan Nager, Nikki Howard, Eric Larsen, Amanda McCants, Sydney Maler and Jordana Lily.

The series not only stars actor Megan Nager, but was also written by the SAG actor and professional writer as well. Megan’s work has been featured on thousands of online publications such as 9gag as well as Tru TV and Amazon. When she’s not auditioning, Megan performs stand-up at world-famous comedy venues such as The Comedy Store and The Hollywood Improv. Megan is known for her viral comedic sketches and mini series that offers commentary on the unrealistic standards of beauty that millennials are forced to combat on a daily basis.

“Comedy is tragedy mixed with surprise and MEGAN NAGER knows how to simultaneously love and mock the world she lives in and the LA life that many dream-seekers lead. She’s brave and collaborative.” – Jean Barker, award-winning film director, and director of Verified.

Beating out hundreds of other films throughout the world, Verified was just awarded Best Romantic Comedy at the Los Angeles Film Awards and chosen as Official Selection at the Atlanta Comedy Film Festival.

The Los Angeles Film Awards is a monthly film and screenplay competition for filmmakers worldwide. LAFA is the first festival to receive 300+ five-star reviews out of over 7,000 film festivals, on the award winning site, FilmFreeway.

The Atlanta Comedy Film Festival receives submissions from filmmakers throughout the world and hand picks only a handful of films to be screened at their festival. After beating 70% of submitted films, Verified was awarded a finalist position and then received an award for an Official Selection to be screened at the world-famous festival that takes place at their Summer 2019 program in July of this year.

In addition to these two festivals, Verified is a competitor at several other festivals throughout the country, including Hollyshorts Film Festival and Sundance Film Festival. Winning at these festivals can make Verified eligible to win an Oscar, BAFTA or European Film Award.

Verified was produced by two independent production companies, The Following Productions and Wake and Make Media, whose films have been featured online as well as on television. Their productions star celebrities such as The Meg’s Page Kennedy, Alexanne Wagner from Netflix’s The Dirt, and dozens of SAG actors who have starred in several award-winning television shows and movies. Both companies specialize in creating relatable content with an incredibly high production value. The companies are run by their cinematographer and editor, Corey Turner, whose lensed hundreds of projects for independent artists, national commercials, Capital Records and Amazon.