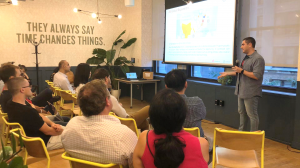 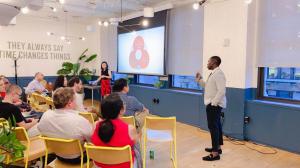 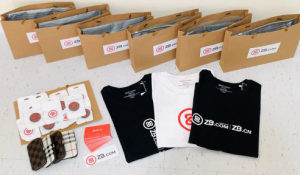 AMERICA, August 31, 2019 /EINPresswire.com/ — On August 29th, 2019, ZB Group held its ZB Talk meetup in New York City. The meetup was organized by The Decentralized Exchange Network (THE DEx) along with Homebloc, and hosted by Mr. Daniel Rufini, ZB Group’s Communication Director. The meetup was held at 33 Irving Pl. and welcomed individuals from all walks of life.

ZB Talk was honored to have the presence of thought leaders from Crypto and Non-Crypto companies from The United States and abroad, such as Blockchain projects, crypto VC’s, institutional and individual investors, exchanges, crypto and non-crypto media etc. The meetup counted also with the presence of representatives/speakers from Homebloc (homebloc.io) and Carbon (carbon.money).

Ms. Jennifer Peng, Co-Founder and Head of Marketing of Homebloc gave us a thorough overview about Homebloc. Homebloc uses smart contracts to engage hotel booking, residential rental and property ownership trading. She explained that the Homebloc exchange is a smart-contract platform that offers global trading 24/7 using blockchain technology to serve and create synergies between two related industries: Residential Real Estate and Lodging, which we define as short and long-term residential property rentals and hotel bookings.

The Homebloc asset token (HST) is used to represent the room usage rights and property ownership. The Homebloc ecosystem uses HOM tokens (ERC-20 standard) to represent the value of ecosystem and use HOM tokens as a reward to users for using and promoting the platform. Homebloc is based in New York City and has operating teams in Mainland China and Singapore. Learn more about Homebloc by visiting www.homebloc.io.

Mr. Gavin Mai, Co-founder and CPO of Carbon explained that Carbon’s team believes that money is a fundamental human right, and not a luxury reserved for the few. He explained that Carbon is building tools and infrastructure to support the evolution of money, wherever it touches society. Fiber, their flagship product, aims to reduce the friction between using fiat money and cryptographically derived value. Features within Fiber allow developers to abstract trading cryptocurrency into an easy-to-use endpoint and application. Carbon’s capital markets division brings traditional finance techniques to the nascent blockchain space.

Carbon has its main office based in New York City right in the heart of the financial district. Learn more about Carbon by visiting their website: www.carbon.money.

ZB Talk is a monthly meetup held in several capitals around the world. It invites professionals and companies in the Blockchain/Cryptocurrency industry for experience sharing, professional networking, panel discussions, speeches and masterclasses.

ZB Group hosted the prestigious ‘Consensus Night’ at MIMa, New York City on May 14th, 2019, along with ChainDD. The event took place in the evening of the second day of ‘Consensus’, by Coindesk, also in New York City. ‘Consensus Night’, an invitation only gathering, was booked up over a week prior to its schedule date. Over one hundred individuals added their names to the waitlist in hope to attend it.