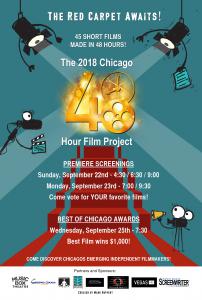 2017 and 2018 Chicago Winners Selected for Cannes Short Film Corner. Will 2019 Weekend Warriors go the Distance for a Threepeat?

On Friday, August 23rd, teams drew a genre from a hat. They were then given a character, prop and line dialogue to include in their films. On Sunday August 25th, filmmakers of all ages, skill levels and experiences raced in a wild dash to the drop off event at Magnanimous Media (www.magnanimousrentals.com), where they turned in their films by the 48 hour deadline.

"We're extremely excited to be screening again at the Music Box Theatre for our 15th Anniversary during their 90th Anniversary." said Jerry Vasilatos, Chicago's City Producer. "It's so gratifying to our filmmakers to be able to share their work on the big screen with Chicago audiences. 2018 was the SECOND year in a ROW that a Chicago Team made it to the Cannes Short Film Corner. I'm hoping in 2019 we can witness a Threepeat!" he added.

All films are eligible for audience awards, and those that met the 48 hour deadline are judged for various awards by local filmmaking professionals. The entry declared to be the overall "Best Film" of Chicago will win a $1,000 Cash Prize courtesy of sponsors Cinespace Chicago Film Studios (www.chicagofilmstudios.com) and the Ziliak Law Group (www.ziliak.com). Chicago's winner will then be sent to the international 48HFP competition, Filmapalooza, to be screened and judged with over 100 city winners from around the globe. From there, 12 films will be chosen to screen in the Short Film Corner at the Cannes International Film Festival like Chicago 2018 best film winner "Knockout” by Alley Cake Films and director Erik Scanlon. This marked the SECOND TIME IN A ROW a Chicago Team was selected to screen at the world-renowned film festival, showing that with determination and talent, teams can truly go the distance.