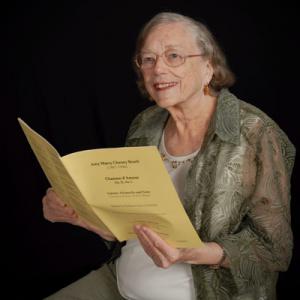 FAYETTEVILLE, ARKANSAS, UNITED STATES, September 10, 2019 /EINPresswire.com/ — Who was the female Mozart? Beethoven? Bach? Most people would find it difficult to name any women classic composers, but they were many, and their work stands among the best of their male contemporaries.

Dr. Barbara Jackson has dedicated her career to preserving music by historic women.

“My particular interest was women composers of the past, because as a teacher, I was well aware that my students, particularly my women students, didn't really know that there was a wonderful past of women composers,” says Dr. Jackson. “Many of these women were really quite famous in their time. When the music was somewhat more out of fashion, it has taken longer for the women to resurface. And I'm glad to have been part of that.”

Dr. Jackson is professor emerita from the University of Arkansas at Fayetteville, where she was a member of the music faculty from 1954-1956 and from 1961-1991. Dr. Jackson received her PhD in musicology from Stanford University in 1959

In 1982 she founded the music publishing company ClarNan Editions, specializing in music by historic women. She has since sold the company but still contributes as a consultant.

In 1994 she culminated her research on the contribution of women composers of the past with the reference work "Say Can You Deny Me"; A Guide to Surviving Music by Women from the 16th Through the 18th Centuries, listing the location of extant manuscript and early printed sources by women in major libraries in Europe and the U.S.

“What I do is to make this music available to performers now. That's what preservation is about. It's not for a museum. It's for the performance!” says Dr. Jackson. “These women are our musical ancestors. “It's really an important thing to have roots and to know what has gone on in the past. To hear these wonderful pieces keep their memory alive and inspires the performers of today.”

Clara Schumann was the wife of the great German composer Robert Schumann. She was also one of the greatest pianists of the 19th century and she published a small body of work under her own name.

“She also had eight children,” says Jackson. “So it's really amazing that she also had time to write music that stands well with the other composers of her time.”

“We don't have as many manuscripts as one might like, but I'll be 90 next month and I plan to keep busy for a long time.”

CUTV News Radio will feature Dr. Barbara Jackson in an interview with Jim Masters on September 12that 1pm EDT.