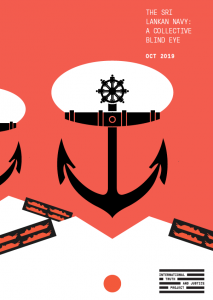 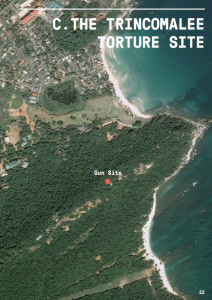 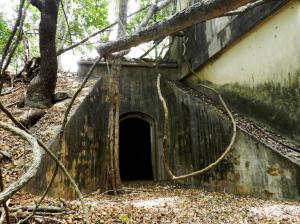 New ITJP report calls for a review of international engagement with the Sri Lankan Navy.

The Trincomalee 11 abduction case was supposed to be the great success story of Sri Lankan justice but tragically it’s become emblematic of failure.”
— Yasmin Sooka

JOHANNESBURG, SOUTH AFRICA, October 22, 2019 /EINPresswire.com/ — The International Truth and Justice Project has called for a review of all naval cooperation with Sri Lanka after it found a large number of top Sri Lankan navy commanders were complicit in torture, disappearance and murder that occurred inside naval sites from at least 2008-14.

“The Sri Lankan Navy: Turning a Collective Blind Eye”, published by the ITJP, compared documents from a decade long police investigation inside Sri Lanka into the disappearance of 11 men in the Trincomalee naval base, with eyewitness testimony from survivors and insider witnesses. It identifies serious investigative shortcomings, conflicts of interest and political interference in the Sri Lankan case. It also notes the violations committed by the Navy did not stop with the end of the civil war 2009 and torture was not confined to one naval base alone.

“The Trincomalee 11 abduction case was supposed to be the great success story of Sri Lankan justice but tragically it’s become emblematic of failure. Many senior naval officers in the command structure in charge of naval intelligence or stationed at Trincomalee haven’t even been questioned, alleged perpetrators have been protected and promoted, and the living victims never even interviewed,” said the ITJP’s Executive Director, Yasmin Sooka.

Senior officers must have known about the activities of the Special Intelligence Unit – a black ops unit established personally by the then Commander of the Navy within Naval Intelligence. Members of the Special Investigation Unit are alleged, among other things, to have operated an underground torture site in the country’s most secure naval base, where scores of prisoners were detained in dungeons over many years. It was impossible for detainees to be brought in and out of this site, for so many people to have been interrogated, fed and guarded without the naval command structure being complicit, argues the report.

“Naval officers we have spoken to, say everyone knew they should turn ‘a collective blind eye’ to what was going on. The whole Navy command structure appears to have been complicit in violations and is seriously tainted”, says Ms. Sooka. “It is time the Sri Lankan Navy is sanctioned until, at the very minimum, the institution cooperates fully with the police investigation and stops rewarding the suspects in this case. International partners are now on notice and can no longer turn a blind eye to the Sri Lankan Navy’s criminality”.

“The Sri Lankan Navy: Turning a Collective Blind Eye” describes lurid details it says would be worthy of a thriller were they not so intensely painful for the victims and their families who are still waiting for justice. At one point, Sri Lanka’s most senior military official was alleged to have hidden a key suspect in naval headquarters while police issued Interpol notices; then he allegedly attempted to abduct a material witness. From jail, naval officers have been threatening the life of the chief investigating police officer. While all but one of the suspects has been released on bail and several have been promoted despite the serious allegations outstanding against them.

The ITJP was the first organisation to publish the GPS coordinates of the Trincomalee underground site in July 2015. Later that year a team from the United Nations visited the locations and corroborated the existence of underground cells.

The report can be downloaded here.