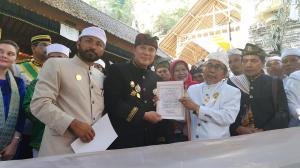 Prince Damien Dematra with King of Klungkung and Jro Penyarikan 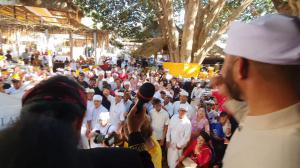 This is the second declaration of Nusantara Peace Day.The declaration was attended by thousands of people from all over Indonesia. With Kings and Queens and Sultans of Indonesia attended and declared the peace at the event.

Prince Damien Dematra explained, to declare the Nusantara Peace Day in Bali, which is famous for its traditional yet tolerant value, is an amazing experience in which I hope could inspire more people to unite and believe in living in peace and harmony.

Pura Hulundanu is closely affiliated with the Goddess of Danu which is the Goddess of water and fertility. She is one of two supreme deities in the Balinese tradition. The Dewi Danu statue, which was built near temple where the declaration was held at Lake Batur, Songan Village, Kintamani District, Bangli, was designated as the largest and highest Dewi Danu Statue in Indonesia by the Indonesian World Record Museum.

According to the committee Jro Penyarikan Khrisna, the event was attended by prominent names from regions all over Bali; Mrs. Putri Koster; the wife of The governor of Bali, King of Klungkung Ida Dalem Smara Putra, King of Singaraja Anak Agung Ugrasena, Sultan Segayoh, Raden Haniz; secretary general of FSKN, Prince Herry from the kingdom of Kutai, the committee chairman Gede Darmawa, Elly Yuniarti from Department of Interior Affairs and many more kings and sultan from Nusantara.