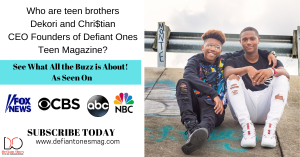 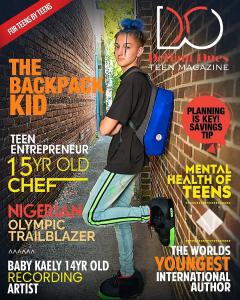 Who is Defiant Ones Teen Magazine? 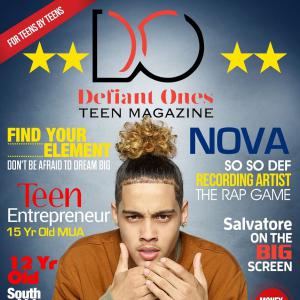 Teen Brothers and CEO Founders of Defiant Ones Teen Magazine are defining and defying what it means to be teenagers.

Christian and DeKori Robinson are defining what it means to be teenagers!

Who are these young men? Both are award winning entrepreneurs and entertainers. They are published models, and actors. Both have won the YOUNG B.O.S.S. Award and awards at the ATL’s Hottest. Yes, at such a young age, the lists of their accomplishments, skills, and roles, are already infinite!

Teen brothers Dekori and Chri$tian are the CEO Co-Founders of Defiant Ones Teen Magazine! These up-and-coming young kings of the digital age are showing why they are the future…

With their newly launched magazine, Defiant Ones Teen Magazine!

DeKori, 18 years old, is the proud winner of the Atlanta’s Hottest Male Model Award. He made his television debut at the age of 7 on Drop Dead Diva. He has been in national commercials and is currently, when not studying, working on his fashion line- set to debut in December of 2019! At school, he is a track runner and the running back of the school football team. In his downtime, he loves art, architecture and music. He has already mastered the saxophone, bass, and guitar. His endless ambition and boundless potential have him pursuing a promising career in engineering!

Chri$tian, 16 years old, is popularly known by his stage name Kindafye. Chri$tian is the decorated winner of the Atlanta’s Hottest Musician Award, and, is also the CEO of his own apparel brand, FYE (Find Your Element). Christian founded this company after his experiences with bullying. He was determined to move past this bit of nastiness, with strength and goodwill. Now, he inspires and encourages other teens to find their inner strength to overcome all obstacles in life! Stepping up to help other kids at school won him a Compassion Award from his teachers! He has even been featured in music videos by Wildfire and Aaron Cole.

Kindafye’s main passion is for music, and he is an award-winning drummer, as well as a singer and rapper. For the past three years, he has played with the AMP Music Series Orchestra, and he is a part of the drumline at his high school. He is currently working on his amazing upcoming R&B debut album, so stay tuned!

So, are you ready to be blown away by the incredible new magazine these young entrepreneurs are behind?
Defiant Ones Teen Magazine is a publication for teens and young adults, by teens! Defiant means defying the odds that society has placed on young teens, and these teens are doing just that! Despite their age, they are innovators, thought leaders, go-getters, team players, originators and game-changers. They are the new wave!
Within the first two weeks of its launch, this magazine has had almost one million social media reaches and has been featured in over 365 major media outlets including: ABC, NBC, FOX, CBS, the Boston Herald, and more!
Here, you can find how other incredible young people like the Robinsons are shaping the world! This magazine includes all the latest teen trends and topics- fashion, entertainment, entrepreneurial stories, financing, health & wellness tips, bullying & suicide prevention and much more from a teen perspective!

The debut of Defiant Ones Teen Magazine on August 15th was a thrilling ride for everyone that picked it up! In addition to the hottest teen topics listed above, it includes nationally published artists and other major teen influencers such as:

Their 2nd issue dropped on October 15th and will be followed up by their 3rd edition on December 15th available on Amazon as paperback or online. You just can’t afford to miss the amazing stuff that goes on in the world of The Defiant Ones, Christian and DeKori Robinson!

A new age is dawning, and these young people are going to be leading it into the future. Are you ready to join, or will you be left behind?