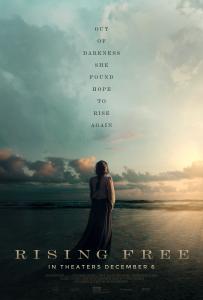 The film’s major draw is its award-winning cinematography showcasing a sweeping landscape of the Pacific Northwest, giving this historical drama its epic feel.

Near the close of American Indian wars, "Rising Free" tells the story of a young woman, Nakomay, in hiding from those set on ridding the land of Native Americans through slaughter and trafficking. Nakomay’s journey from bondage to freedom begins after the loss of her family through these acts of violent prejudice taking place in 1870s Oregon Territory.

Debut actress Melanie Foust connected with her character the first time she read the script and says “Nakomay’s encounter with freedom is much like my own, and I knew I had to be a part of this.” Foust hopes that her participation in the film will impact others who are “living under the weight of something they were never meant to carry.”

The core message of "Rising Free" focuses on hope in spite of hopelessness while illuminating how the action of mercy can bring triumph in the midst of insurmountable suffering.

Production for "Rising Free" took three years and funding came at unplanned times from individuals as they were moved to give. The production journey was a leap of faith for all involved.

Christian Johannesson, cinematographer and director of "Rising Free," attributes the dramatic cinematography to the dogmatic application of natural light and precise timing. “A studio, green screen, or the such, gives great entertainment, but it cannot capture the truth of natural lighting and filming conditions,” said Johannesson. “This aim kept us mobile and ready, which was needed for fast changing weather conditions.”

About Lightfall Films
Lightfall Films is an American motion picture production and distribution company founded in 2017, committed to making films that inspire hope and give light in the darkness.