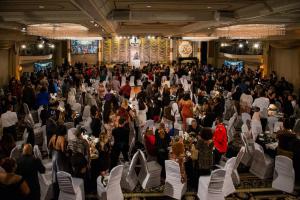 On January 18, the annual Gentlemen’s Ball Against Human Trafficking was held in the Fort Harrison auditorium, located in downtown Clearwater, to celebrate the successes of The Gentlemen’s Course.

On Jan. 18, the annual Gentlemen’s Ball Against Human Trafficking awarded youth for their advocacy and raised awareness of human trafficking.

CLEARWATER, FLORIDA, US, January 23, 2020 /EINPresswire.com/ — On January 18, the annual Gentlemen’s Ball Against Human Trafficking was held in the Fort Harrison auditorium, located in downtown Clearwater, to celebrate the successes of The Gentlemen’s Course, a nonprofit organization founded by Christopher King, which teaches proper etiquette, manners, raises awareness of human rights and advocates against human trafficking.

During the reception, guests took photos at the photo booth and bid on silent auction items from signed boxing gloves and NFL jerseys to signed photos of King’s grandfather, the jazz legend B.B. King. Before the event began guests were served a buffet-style dinner by the Fort Harrison’s five-star chefs.

The Executive Director of United for Human Rights Florida, Cristian Vargas, served as master of ceremonies for the evening. To set the tone of the event Vargas read a special proclamation from St. Petersburg Mayor Rick Kriseman commemorating January 18 as The Gentlemen’s Course Day.

Two youth graduates of The Gentlemen’s Course were awarded as Gentleman and Lady of the Year for showing initiative in advocating human rights and stellar growth as individuals.

“During The Gentlemen’s Course I learned more than just etiquette and human rights,” said Gentleman of the Year awardee Johnny Pittman II. “I also learned that to become successful, it takes hard work, and once you get there always give back to your community.”

King also took the opportunity to spotlight two other nonprofit organizations that combat human trafficking and other human rights abuses in the Tampa Bay area. Michael Long, the executive director of SailFuture, a nonprofit with a unique approach to helping teenage foster care boys by learning seamanship and Kerri Kasem, daughter of the radio legend Kasey Kasem and founder of the nonprofit Kasem Cares, which fights elder abuse, both shared their message and expressed their passion for human rights.

“In honor of Human Trafficking Awareness Month we look to continue to bring together not only the community but organizations and survivors for a night of celebration of the progress and success for them as individuals and the steps they have taken after going through such a horrific and traumatic part of their lives,” said King. “One community united rallies up the next. It is time we go back to the days when it took a village to raise a child. We have a responsibility to educate ourselves in order to educate another.”

United for Human Rights (UHR) is an international, nonprofit organization dedicated to implementing the Universal Declaration of Human Rights at local, regional, national and international levels. Its membership is comprised of individuals, educators and groups throughout the world who are actively forwarding the knowledge and protection of human rights by and for all Mankind.

The Church of Scientology sponsors the printing of the educational materials for UHR and its youth education program, Youth for Human Rights. Central to Scientology beliefs and tenets is a conviction that all people are endowed with the inalienable rights. L. Ron Hubbard, the founder of the Scientology religion, inspired the establishment of United for Human Rights with these words: “Human rights must be made a fact, not an idealistic dream.”