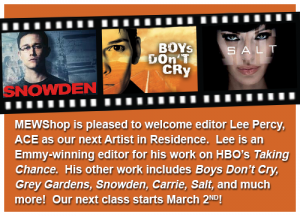 NEW YORK CITY, NY, UNITED STATES, February 18, 2020 /EINPresswire.com/ — Manhattan Edit Workshop (MEWShop), the cutting-edge, digital-training destination for post-production specialists and content creators is proud to announce the upcoming Artist in Residence for the March 2nd class will be Emmy-winning editor Lee Percy, ACE.** Lee was previously an Artist in Residence at MEWShop over a decade ago and has since had tremendous success in his career on both television and film projects. Lee has a unique origin story for an editor, since he studied acting at Juilliard before finding his way into editing. Lee believes his experience there granted him the distinct skill to select the best moments from an array of performances in the cutting room. Lee's eye for strong performances has been a valuable asset to him, and three of the films he has worked on have won an Academy Award for Best Actor or Best Actress. "A background in acting enhances a film editor's ability to shape a film's narrative and make the most of any actor's performance," says MEWShop President Jason Banke. "Providing one-on-one time to our students with such a distinctly qualified and successful editor like Lee is why our Six Week Intensive remains the only class like it."

About Lee Percy: Lee Percy, ACE has worked with director Barbet Schroeder from the Academy Award-winning film, "Reversal of Fortune" to "Murder by Numbers." Lee also edited the Academy Award-winning "Boys Don't Cry," and the critically acclaimed film, "Maria Full of Grace." He also worked on "The Ice Harvest "for director Harold Ramis, Oliver Stone's "Snowden," as well as Sundance Film Festival 2009 nominee and Emmy-winning "Taking Chance." Lee's recent work includes the remake of the classic horror film "Carrie," along with such films as "Amelia," HBO's "Grey Gardens," "The Kindergarten Teacher" starring Maggie Gyllenhaal, and “The Mountain Between Us” with Kate Winslet and Idris Elba.

About Manhattan Edit Workshop’s Six Week Intensive Workshop: The post-production industry is highly competitive, and knowing the industry standards – Premiere Pro, After Effects and Avid Media Composer – is critical for success. MEWShop offers in one comprehensive six-week course, the training that young post-production professionals need in each of these editing applications, taught by certified instructors. No other program guarantees more time in the classroom or more working on one’s own computer. The Six Week Intensive Course will take students through each program as they work on various real-world projects to illustrate the distinct strengths and nuances of each NLE software. MEWShop’s Six Week Intensive is the only course of its kind that allows students to choose the footage they want to edit on the platform they prefer. This program also is the only Six Week program where students can have the opportunity to become a Certified Avid User, through certified training and exams.

Beyond the creative and technical aspects of editing, a portion of the Six Week Intensive Workshop is focused on the best strategies to secure a job once the class ends. Students will draft cover letters and resumes, which will be refined over the span of the class, and also discuss with instructors about interview strategies and job applications, as well as how to appropriately set rates and find the right work for each graduate’s unique interests.

MEWShop also continues its successful intern/entry level referral program, where we connect students to top post houses and companies in the New York area. Upon completion of the Six Week Intensive Workshop, students will be provided with links to MEWShop's industry contacts in order to apply to paid editorial internships and entry level positions – via resumes and work samples – where students will be given the opportunity to utilize their training and pursue a career in post-production.*

*Manhattan Edit Workshop cannot guarantee students will be hired or granted an interview as a result of the Six Week Intensive Workshop. **Artists in Residence are schedule permitting.