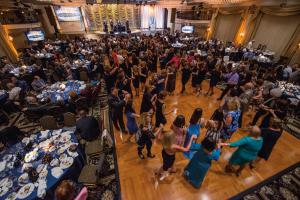 Members of the Laconian Society of West Florida performing Grecian folk dances at their annual dinner in the Fort Harrison auditorium on February 23.

On February 23, the Laconian Society of West Florida held their annual dinner and dance in the auditorium of the Fort Harrison.

CLEARWATER, FLORIDA, US, February 26, 2020 /EINPresswire.com/ — On Saturday, February 23, the Church of Scientology Flag Service Organization hosted the Laconian Society of West Florida for their annual dinner and dance in the auditorium of the Fort Harrison, the international religious retreat of the Church. Over 400 Greeks were served five-star meals by the chefs of the Fort Harrison.

The Laconian Society of West Florida is a nonprofit cultural organization based in Clearwater, Florida. It was established by Laconians, Greeks from the prefecture of Laconia, a geographical region that includes the historical city of Sparta. The Society has the purpose of preserving the Grecian culture outside their homeland.

Various images and video walkthroughs of their homeland played on the screen as members dined and listened to live Greek folk music.

Once finished eating, guests took to their feet, performing traditional Greek folk dances, such as the Kalamatianos, the Syrtos and more, dancing in groups with their arms across each other’s shoulders and stepping in unison.

Hope Lakiotis, one of the organizers of the event for the Laconian Society, says, “We started having our dinner dance here over 10 years ago and we just love it—the food, the nice service, everything. A handful of our attendees are snowbirds, but overall everyone lives in or around this area.”

Lisa Mansell, the Public Affairs Director for the Church of Scientology Flag Service Organization says, “We recognize that so much of our Western culture comes from Greece—architecture, art, philosophy, theater, and this is why we are honored to host the Laconians each year.”

About the Church of Scientology:

The Scientology religion was founded by humanitarian and philosopher, L. Ron Hubbard. The first Church of Scientology was formed in the United States in 1954 and has expanded to more than 11,000 churches, missions and affiliated groups, with millions of members in 165 nations. Scientologists are optimistic about life and believe there is hope for a saner world and better civilization, and actively do all they can to help achieve this. The Church of Scientology regularly engages in many humanitarian programs, such as anti-drug campaigns, human rights campaigns and global education programs. To learn more, visit www.scientology.org.
The doors of the Fort Harrison, the Church of Scientology Flag Service Organization’s signature retreat, are open for nonprofit organizations and charities to hold their own events.