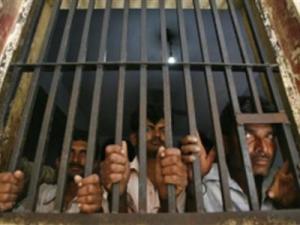 * Tamil POWs were massacred in Prisons since 1983. * The government of Sri Lanka has an international legal obligation to ensure the safety of these prisoners

Even though there are press reports that Tamil POWs have been moved to another prison, still there are concerns for their safety, given the history of massacres of Tamil POWs since 1983””
— Visivanathan Rudrakumaran

A letter was sent on this issue by the Prime Minister of TGTE Mr. Visuvanathan Rudrakumaran to the UN Resident Coordinator for Sri Lanka Ms. Hanaa Singer. Letters were also sent to India, US and the Red Cross.

Press reports indicate that a number of Sinhalese prisoners have attempted to escape the prison in an effort to protect themselves from the spread of the Covid-19 contagion.

TGTE recently received a message from relatives of Tamil prisoners of war being held in the prison without charge, that Sinhalese inmates are attempting to coerce them to join in their efforts. These Tamil POWs do not want to participate in this prison insurrection and as a result are under threat by Sinhalese prisoners.

“Even though there are press reports that Tamil POWs have been moved to another prison, still there are concerns for their safety, given the history of massacres of Tamil POWs since 1983” said Mr. Rudrakumaran.

“There is also grave concern on the part of the POW families that this unrest will be used as a pretext for the Sri Lankan government to instigate a massacre of Tamil POWs.”

THIS FEAR IS BASED ON SRI LANKA’S HISTORY OF MASSACRES OF TAMIL POWs SINCE 1983:

1) In 1983, during the pogrom against the Tamil population, 53 Tamil political prisoners in Welikada prison (including a Christian priest) were brutally tortured and killed. On case, a prisoner’s eyes and testicles were gouged from his body.

“Prisoners of war must at all times be humanely treated. Any unlawful act or omission by the Detaining Power causing death or seriously endangering the health of a prisoner of war in its custody is prohibited, and will be regarded as a serious breach of the present Convention. In particular, no prisoner of war may be subjected to physical mutilation or to medical or scientific experiments of any kind which are not justified by the medical, dental or hospital treatment of the prisoner concerned and carried out in his interest. Likewise, prisoners of war must at all times be protected, particularly against acts of violence or intimidation and against insults and public curiosity. Measures of reprisal against prisoners of war are prohibited.”

ABOUT THE TRANSNATIONAL GOVERNMENT OF TAMIL EELAM (TGTE):

The Transnational Government of Tamil Eelam (TGTE) is a democratically elected Government of over a million strong Tamils (from the island of Sri Lanka) living in several countries around the world.

TGTE was formed after the mass killing of Tamils by the Sri Lankan Government in 2009.

TGTE thrice held internationally supervised elections among Tamils around the world to elect 132 Members of Parliament. It has two chambers of Parliament: The House of Representatives and the Senate and also a Cabinet.

TGTE is leading a campaign to realize the political aspirations of Tamils through peaceful, democratic, and diplomatic means and its Constitution mandates that it should realize its political objectives only through peaceful means. It’s based on the principles of nationhood, homeland and self-determination.

TGTE seeks that the international community hold the perpetrators of war crimes, crimes against humanity, and genocide against the Tamil people to account. TGTE calls for a referendum to decide the political future of Tamils.

The Prime Minister of TGTE is Mr. Visuvanathan Rudrakumaran, a New York based lawyer.

Tamils in the island of Sri Lanka faced repeated mass killings in 1958, 1977, and 1983 and the mass killings in 2009 prompted UN Secretary General Ban Ki-moon to appoint a Panel of Experts to report on the scale of the killings.

According to UN internal review report on Sri Lanka, over 70 thousand Tamils were killed in six months in early 2009 and Tamil women were sexually assaulted and raped by the Sri Lankan Security forces. A report by the International Truth and Justice Project (ITJP) published details of Sri Lankan Military run "Rape Camps", where Tamil women are being held as sex slaves. There are over 90,000 Tamil war widows and thousands of Tamils disappeared due the conflict.

According to this UN report, the killings and other abuses that took place amount to war crimes and crimes against humanity. Independent experts believe that there are elements of these abuses that constitute an act of genocide.

Members of the Sri Lankan security forces are almost exclusively from the Sinhalese community and the victims are all from the Tamil community. A Buddhist Monk shot and killed a Sri Lankan Prime Minister 1959 for having talks with Tamils.