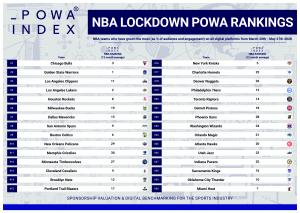 LONDON, UNITED KINGDOM, June 1, 2020 /EINPresswire.com/ — DataPOWA Ltd has today released a list of the NBA teams as ranked by POWA index score during the global lockdown. Analysis of multiple datasets across digital platforms such as Twitter, Facebook, Instagram, TikTok, YouTube, Google, Bing & Baidu reveal which teams are leveraging digital and mobile most effectively during the unprecedented pause in sport.

Top spot on the list goes to Chicago Bulls, the Bulls were not having a great season and there is lots of speculation around the future of the head coach, however the release of the Netflix series about Michael Jordan, The Last Dance, has created a surge of nostalgia which the team have been able to fully exploit during lockdown.

Golden State Warriors are next on the list, and Stephen Curry has been at the forefront of player efforts to tackle the spread of the virus. For fans, Warriors are all about next season at this point.

Milwaukee Bucks (6th place) became the first team to clinch a playoff berth and top the Eastern Conference. Giannis Antetokounmpo will likely be crowned MVP for a second consecutive season whenever the current campaign’s awards are given out.

DataPOWA C.E.O. Michael Flynn said: “The Covid-19 lockdown has accelerated the change in the way fans engage with their teams. Nostalgia can be a great distraction for fans during low periods, and the Bulls have been able to use old video footage to create winning social media content. The NBA is still ironing out details on how the season will resume and the LA teams will keep the conversation going with the ‘Battle of LA’ narrative – which plays out brilliantly for both teams.”
NBA and other top global league lockdown rankings are available ‘free to view’ on POWA index here.