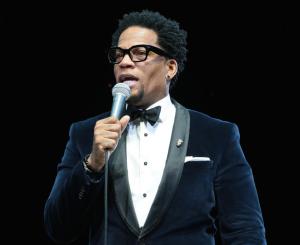 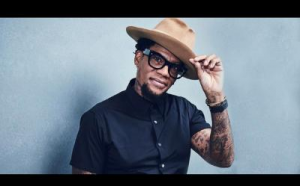 LOS ANGELES, CALIFORNIA, USA, July 31, 2020 /EINPresswire.com/ — D.L Hughley celebrates the successful release of his latest book “Surrender White People; Our Unconditional Terms for Peace.” The national bestselling author will host fans on FanRoom, a live virtual platform to showcase his book. The book engages readers in a delightful discussion on race, racism, and racial inequality that helps readers to embrace the discomfort and examine the difficult, often polarizing content. D.L. Hughley is an American actor, political commentator, radio host, author and stand-up comedian. Hughley is best known as the original host of BET's Comic View from 1992 to 1993, the iconic character on the ABC/UPN sitcom The Hughleys, and as one of the "Big Four" comedians in The Original Kings of Comedy, a film and tour by Spike Lee. His current podcast, D.L. Hughley Uncut airs on Pluto TV. He has been the host of CNN's D. L. Hughley Breaks the News, a correspondent for The Jay Leno Show on NBC, and a local radio personality and interviewer in New York City. In early 2013, D.L. Hughley landed in 9th place on Dancing with the Stars. His relatability is the key to his success as a comedian, author, and actor.

FanRoom is the brilliant collaboration of an actor/producer, talent agent and celebrity event producer in response to the pandemic that stilled the entertainment industry. Fighting boredom, depression and isolation, the public is hungry for normalcy. Cedric the Entertainer, award-winning actor, producer, and comedian, Mich Faulkner, CEO of 123 Talent, and Jeff Krauss, President of event production and entertainment company IE Group, designed a new reality. They brought on producers, co-hosts, Chanel Omari and Jae Benjamin. Pooling their talents and resources, they created a solution for staying home and social distancing while getting an intimate entertainment fix for eager fans. Artists connect with fans in ways never possible before. FanRoom became an instant success.

If public fears contradict a value in place, even if everyone knows it is just not true, they stay with the story. Myths like the endearing tale of Christopher Columbus discovering America and having a Thanksgiving celebration with the natives is merely a folk tale, but it is a well-loved picture handed down as a bonding holiday. The public is reluctant to give up the pleasure of the vision, so they continue the holiday despite the truth. “It’s kind of our story in America”, Hughley said in a recent interview with the National Public Radio (NPR). Harper Collins says the new book is a humorous take on societal divisions that still sting. As a comedian, the legendary comic is an original member of the ‘Kings of Comedy,’ a quartet comprised of Hughley, Steve Harvey, Cedric the Entertainer, and Bernie Mac. Known for quick wit and intelligent banter, as an author, Hughley draws on the resourcefulness of his humorous side to effectively attract readers to deliver his message. He has written critically acclaimed books such as the New York Times Bestseller “How to Not Get Shot: And Other Advice from White People” and the “Black Man, White House: An Oral History of the Obama Years.” Hughley shares his deepest thoughts and emotions yet in this latest book. It cleverly lures the reader in and helps them immerse themselves in the tensions and complexities of contemporary America. The book has attracted considerable positive response during the sensitive “Black Lives Matter” controversies. To mark the launch, Hughley hosts fans and supporters on FanRoom Live.

We are delighted to bring D.L. Hughley closer to fans through innovative technology to overcome the paralysis of the Covid 19 Pandemic and allow the laughter to move gloom into a powerful regaining of joy. As a comedian, author, and radio star, “Hughley is one of the most astute and hilarious critics of politics, race, and entertainment in America” said Jeff Krauss, Co-Founder and Co-Creator of FanRoom Live. It is a private, intimate “meet and greet” for fans to interact with Hughley on August 6, 2020, at 7:00 PM PST, while social distancing.

FanRoom Live is a digital platform that connects actors, authors, comedians, athletes, and celebrities to their fans in an intimate platform of virtual events conducted like “town-hall” meetings. FanRoom Live events feature Q&A sessions, giving fans access never experienced before. Previous guests of FanRoom include Cedric The Entertainer, George Lopez, Richard Kline, and George Wayne the former Vanity Fair scribe. Up-coming talents who are set to be announced include Kurt Angle, Brant Daugherty, Jake The Snake Roberts, and Holland Roden to give the platform the power to overcome current challenges. D.L. Hughley brings the small-town feeling virtually as he introduces his book on FanRoom Live on August 6, 2020, at 7:00 PM PST. Tickets can be purchased for $25.00 on FunRoom Tickets for this event are available for purchase on the FanRoom Live website at www.fanroomlive.com.