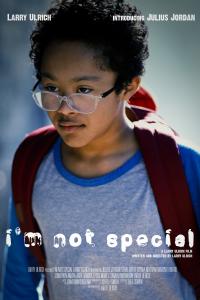 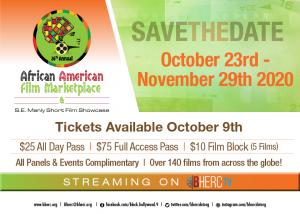 Along with assisting filmmakers on their journey to create a powerful film, at the same time, we give our filmmakers the tools they need to ensure they are set on a path to a promising future.”
— Sandra J. Evers-Manly, President & Founder BHERC

In "I’m Not Special", filmmaker Larry Ulrich brings to the public the story of an eleven-year-old young man with Down Syndrome who has a once in a lifetime opportunity to participate as an athlete in the Special Games. However, his athletic future remains in jeopardy when he must accomplish this as his drug dependent father battles through his struggle of fatherhood and addiction. “I watched an ESPN SC Featured film titled, `Special Olympic Runner Deserves Your Respect`, the Andrew Peterson story. I was so inspired by his life, I decided to write a story based on a character with a disability who has a goal of competing on the highest athletic stage. After months of creating characters and storylines, I'm Not Special was born,” said writer-director Larry Ulrich. “Sandra Evers-Manly, President and Founder of Films with a Purpose, believed and invested into this project 100%. Their support has been tremendous in taking the words from the script to the screen.”

“By producing films that tell the stories that matter, we seek to inspire more artists to pursue their goals to share their vision. Along with assisting filmmakers on their journey to create a powerful film, at the same time we give our filmmakers the tools they need to ensure they are set on a path to a promising future,” stated Sandra J. Evers Manly, BHERC/FWAP Founder.

A native of La Marque, Texas, filmmaker Larry Ulrich has acted into a myriad of independent and international films. Taking his career in his own hands, he created, wrote, directed, and starred in his own projects including Dear God (film festival winner), Battered (film festival winner) and his present project, I'm Not Special. Larry holds a Master of Arts degree in Social Entrepreneurship & Change from Pepperdine University and a Bachelor of Arts degree in Public Affairs from Huston-Tillotson University, an HBCU in Austin, Texas. Larry is currently the CEO of his production company called Ulrich Entertainment Group.

The star of the film is Julius Jordan a young man with hypotonia (low muscle tone) from Down syndrome since birth. A determined child who grew strong quickly becoming very active las a little boy who by age 5 he was capable of completing 10 sit-ups, with some support, on a balance ball and loved rock climbing introduced to him in Physical Therapy sessions. Julius is an actor who continues to be active, playing with his dog, video games, and all sorts of sports such as soccer, basketball, swimming, surfing, and his new favorite football. He keeps his family busy with auditions and you will find him in print and commercials for Old Navy, Target, and Spotify to name a few.

Since the program began, FWAP has funded, partially funded and or produced ten films. The first three projects selected for funding were, "Agents of Change" (partial funding), which examined the untold story of the racial conditions on college campuses and in the country that led to these protests and how the films characters were caught at the crossroads of the civil rights, Black Power, and anti-Vietnam war movements at a pivotal time in America’s history; "Forgiveness", the story of a precocious African American boy who wins a national essay contest sent by the White House and he is granted one wish as his prize; "21 and Done", the horrific saga of youth who “age out” of the foster care system and points the lens at an antiquated foster care system following young adults as they begin to navigate a tumultuous transition to adult life out of foster care. All three films received acclaim from festivals and audiences across the country. Current films include: "Avenging Angels" 16-year-olds Keith and Taylor have a violent confrontation with an adult sexual predator; "Child Support", Monica, a middle school student, is forced to play survival of the fittest with bullies at school; "Dallas Invisible", a look into the web of homeless people in Dallas who live their lives in a society that treats them as if they are invisible; "Junebug", here a writer is inundated with memories as she struggles to tell the story of growing up with her dysfunctional musician father; "One Chance", five talented young African American female performers are pushed in their musical careers while sharing their personal journeys in achieving their dreams.

Films With A Purpose (FWAP) is an invitation only production fund and emerging pathway for a new kind of storyteller, this innovative initiative of BHERC, is a provocative resource to help diverse storytellers make films that challenge and empower the human spirt, that scream for action and answers to our social ills brought to life on the big and small screen. Through funding, mentorship, and consultative work, FWAP supports artists who will shift the spotlight to a much larger conversation. FWAP is committed to driving social change and expressing the urgency of current issues through deeply rooted messages found within film. Emphasizing the struggles and joys of life, our films highlight topics such as race, family, history, human rights, conflict, and health. Learn more about our filmmakers and films. For more information log on to www.filmswithapurpose.net

The Festival includes 140 films, the online premiere, 10 panels, special events and a special tribute to Director Michael Schultz and debuts as a virtual experience this year due to COVID – 19 on the BHERC streaming service www.BHERC.TV October 23 through November 29, 2020. Festival passes are available online at www.bherc.org. $75.00 for a full Festival Pass, $25.00 for a Day Pass and $10.00 for a block of 5 films. All panels and special events are Free. (L)