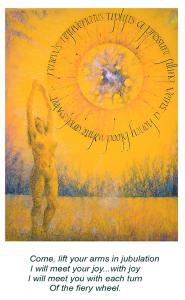 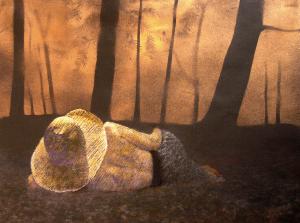 In the strictest sense of things, Kimberly didn't find art. Art found him.

Because of my historical background, it was a shock to realize that our present patriarchal culture could not be presumed to be the natural order of human society.”
— Kimberly Berg

NEW YORK, NY, USA, October 30, 2020 /EINPresswire.com/ — Often life tends to take us on a path different from what we originally intended. This predicament was undoubtedly the case for artist Kimberly Berg. He originally had other plans when he moved from Wisconsin's rolling pastoral hills to the city that never sleeps.
In the strictest sense of things, Kimberly didn't find art. Art found him.

When he moved to New York City after graduating from the University of Wisconsin, Kimberly intended to become a writer. But moving toward getting a publisher didn't seem to be Kimberly's greater calling. He would become disenchanted by the publishing world and moved to the Adirondacks to build a cabin and live in simplicity.

Inspired by Thoreau and Zen philosophies, Kimberly Berg would resort to a self-sustainable way of living. He learned how to survive without electricity, use wood-fueled fires for heat, and grow his food. The shift of lifestyle would also expose Kimberly more and more to the craft of visual arts. He took the time to sketch, something he did in his childhood but never devoted himself to. Kimberly would hone his craft and master it, soon creating a unique style.
Today, Kimberly Berg wholeheartedly immerses himself in the world of art. To the premier artist, visual arts are more than just a means of creative expression. It's also a tool to communicate messages that matter. For artist Kimberly, his art is his voice raised against the abusive patriarchal culture that plagues the world. He uses his work to speak actively against abuse and discrimination toward women. Nowadays, women struggle to rise above society due to the prevailing mindsets that belittle women's work and effort. Generally, women receive lower salaries, lesser opportunities, and lesser chances of taking on influential community roles.

The inspiration for Kimberly's advocacy began ten years ago when he read Layne Redmond's When Drummers Were Women. "That book made me realize for the first time that a matrifocal culture has dominated the world since prehistoric times," shares Kimberly. "Because of my historical background, it was a shock to realize that our present patriarchal culture could not be presumed to be the natural order of human society. With this understanding, I had to acknowledge as a man enjoying the benefits of a privileged gender that it is indefensible to think of or treat women as inferior in any way."
Activist and artist Kimberly hopes that his work would inspire society to shift their ways and give women more chances to excel and thrive, whether at work or in life. He continually advocates for women's rights and equality all across the board.

Kimberly Berg has still put his writing background to fair use, often merging his visual art with poetry and creative writing. He seamlessly joins the impactful messaging of visual creations and the written word. Audiences readily interact with his work in an interdimensional way.
The gift to weave together the visual and written portions of his work makes Kimberly a unique artist. No other artist seamlessly blends both practices into one with perfection. Consequently, Kimberly Berg has received the highest praise and critical acclaim all across the art world. Today Kimberly Berg runs Isis Rising, a curation of his best works.