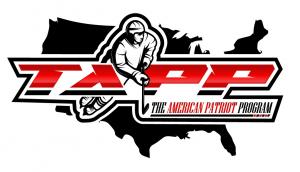 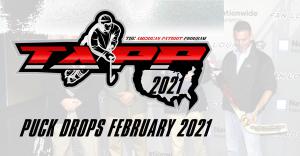 TAPP is set to work with NHL teams throughout America beginning in 2021.

TAPP drop's the puck in 2021 with a 10 year anniversary Goalie Stick Award honoring health care organizations and individuals in rinks throughout America.

…in 2021, TAPP will be teaming up with four NHL teams in honoring those within the health care community who are standing on the front lines for the health of America.”
— TAPP Media Relations Dept. Adam Hoogenakker

TAPP members across the United States are joined in solidarity to honor the service and sacrifices of those who have served America. TAPP’s founder and national director, Wes Hazlett, was deeply moved by a photograph he had seen of doctors and nurses with facial lacerations from wearing masks for exhaustively long periods. Hazlett and TAPP team members are committed to honoring those in the health care industry who are battling on the front lines during a global pandemic.

“We’ve got a great team again this campaign and we were united when it came to selecting our health care industry and the selfless workers who are making a lot of deep sacrifices in order to treat those battling the effects of Covid-19,” said Hazlett. "Sacrificing for others is what our health care professionals do on a daily basis as they unconditionally serve our communities and families," added Rick Randazzo, TAPP team member and Fellowship of Christian Athletes hockey director.

Tom Chorske, director of operations and assistant general manager of the St. Cloud Norsemen of the NAHL, is a 2021 TAPP team member. "I’ve proudly supported TAPP for several years. As part of the St. Cloud Norsemen, I’m glad to be able to introduce TAPP to our fans and the Central Minnesota hockey community. I’m quite certain the people and hockey fans in the Greater St. Cloud area will help support and increase TAPP’s mission of honoring military personnel and health care workers across America."

During the 2010-2011 NHL season, TAPP’s 'Operation Fire and Ice' campaign honored six purple heart recipients at six NHL venues across America with the American Patriot Award. Due to the shortened NHL season in 2021, TAPP will be teaming up with four NHL teams in honoring those within the health care community who are standing on the front lines for the health of America.

Vaughn Hockey of Michigan is TAPP´s official goalie stick manufacturer. Scott Hughes of Vaughn Hockey emphasized the mission of TAPP's 2021 Operation Frontline Defense campaign, stating, "we must do our part in honoring fellow Americans in the health care industry at this time. Vaughn Hockey is excited to join in this campaign to recognize some special people through the American Patriot Goalie Stick Award."

Two TAPP award events are slated in February with events scheduled to occur on a monthly basis for the remainder of the NHL season. Event details will be released in late January.