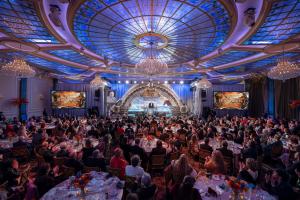 HOLLYWOOD, CA, UNITED STATES, January 26, 2021 /EINPresswire.com/ — Writers of the Future is monitoring the current scene of the pandemic and has decided to push the annual event and the book release of L. Ron Hubbard Presents Writers of the Future Volume 37 to the fall of 2021. The Contest Director, Joni Labaqui, will announce the date once finalized.

The Contest postponed the awards ceremony for volume 36 last April when it became evident that 2020 would not allow an awards event. So, it was decided to combine events in 2021.

This will be the first time in its 37-year history that the Writers of the Future Awards Gala will be a double ceremony. “As we had to postpone last year’s awards ceremony due to COVID-19, we saw an opportunity to create art for Volume 37 with the same cover elements and so making a two-volume set,” Labaqui went on. “This is a definite silver lining.” Echo Chernik, Illustrators of the Future coordinating judge, painted both covers.

The double-release will permit winners from Volumes 36 and 37 to double-up on bookstore signings, in-person and virtual.

The winners in L. Ron Hubbard Presents Writers of the Future Volume 37 are listed below by the quarter they won.

Writers of the Future Contest

This year, we will also have two published finalists.

Illustrators of the Future Contest

L. Ron Hubbard initiated the Writers of the Future Contest in 1983 to provide “a means for new and budding writers to have a chance for their creative efforts to be seen and acknowledged.” Based on its success, Illustrators of the Future was created to provide that same opportunity for the aspiring artist.
The Contests have recognized over 800 writers and illustrators as winners.

The intensive mentoring process has proven very successful. Winners of the Writing Contest have published 1,150 novels and nearly 4,500 short stories. They have produced 33 New York Times bestsellers, and their works have sold over 60 million copies.

Winners of the Illustrating Contest have produced over 6,000 illustrations, 360 comic books, graced 624 books and albums with their art, and visually contributed to 68 TV shows and 40 major movies.

For more information on the Contests, visit www.writersofthefuture.com.