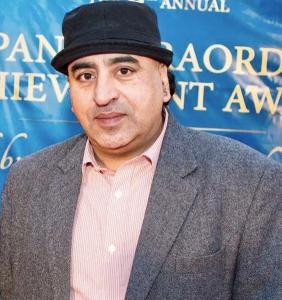 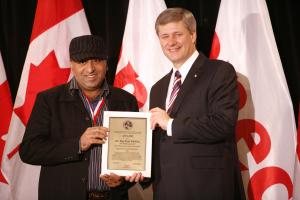 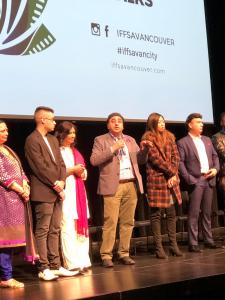 R. Paul Dhillon presenting his latest feature film THE FUSION GENERATION at the International Film Festival of South Asia premiere in Surrey, BC.

Award winning filmmaker-journalist R. Paul Dhillon is the recipient of BC Entertainment Hall of Fame's 2020-21 StarWalk Star. He founded DESIBUZZCanada.com.

This is an incredible honour for me, for my community and for all the desi artists and entertainers in BC, which I accept humbly. I hope to continue pushing boundaries in my art and journalism work.”
— R. Paul Dhillon

FOR IMMEDIATE RELEASE: Vancouver based journalist, screenwriter, producer, and director R. Paul Dhillon has been named to the BC Entertainment Hall of Fame (BCEHOF), the second South Asian/Indo-Canadian artist to ever receive the honour.

Dhillon, editor of the South Asian LINK newspaper and founder-publisher of online news magazine DESIBUZZCanada.com was selected as a 2020-21 StarWalk Star for his considerable work in the international film industry.

“This is an incredible honour for me, for my community and for all the desi artists and entertainers in BC, which I accept humbly,” said Dhillon. “I hope to continue pushing boundaries in my art and journalism work.”

Dhillon hopes the recognition, which comes with a Star on the Walk of Fame on Granville Street in downtown Vancouver, will be seen as an example of the body of work being done by members of the creative sector outside of traditional Hollywood.

Dhillon has won a number of awards for both his film and journalism work, and in this latest honour he will join the 300+ previous inductees who have been recognized for their significant contributions to the province’s entertainment industry and cultural landscape.

“The BCEHOF is proud and excited to present a very diverse and impressive group of StarMeritus and StarWalk inductees who represent artistic excellence in British Columbia,” stated BCEHOF President Rob Haynes. “While we are limited this year due to COVID-19, we look forward to scheduling and celebrating their individual inductions over the coming months to honour their contribution.”

R. Paul Dhillon is an award-winning journalist, screenwriter, producer and director based in Vancouver. He has also done freelance writing for mainstream publications like The Vancouver Sun and Georgia Straight newspapers, where he was a film critic. Dhillon’s early work includes TEARS AND SIGHS on the abuses of alcohol in the South Asian community as well as a WATNO DUR, a Variety television show. Other credits include THE SAINT SOLDIER (1999/2000) – a one-hour documentary on B.C.’s Sikh community. SLICES OF MY LIFE (1992/93), a slice of the immigrant experience and SOUTH VAN STUD (1992), a play for Expressions ’92 Youth Festival. He has written, produced and directed over 40 productions, including nearly dozen documentaries for televisions as well as two feature films, including his debut SWEET AMERIKA, a story set around the time of 9/11 about a Sikh grocery store owner in New York. Dhillon’s popular music documentary THE BHANGRA GENERATION and Sweet Amerika were acquired by Canadian Broadcasting Corporation (CBC). Dhillon also produced 13-part music Documentary Series BHANGRALICIOUS, which he wrote and directed for national broadcast on Rogers OMNI channel. He has also written numerous screenplays, including the thriller OF HEAVEN AND HELL and gangland crime drama B TOWN BOYZ. He also wrote, produced and directed his latest feature THE FUSION GENERATION, which was released theatrically on August 30th, 2019.