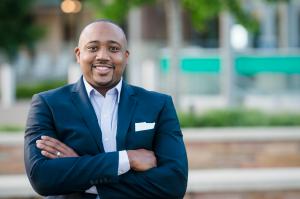 As a husband and a father, I want to make Sandy Springs a better place to live, not only for my family but for you and yours. We all deserve better and I'm ready to put plans into action.”
— Dontaye Carter, Mayoral Candidate, Sandy Springs, GA

SANDY SPRINGS, GEORGIA, FULTON, May 14, 2021 /EINPresswire.com/ — Former Atlanta journalist turned businessman and community champion, Dontaye Carter, formally announced his run for the mayoral seat in Sandy Springs. Carter, his supporters, and campaign organizers hosted a press conference on Friday, May 14th, 2021 at Sandy Springs City Hall, 1 Galambos Way, Sandy Springs, GA 30328 at 10a.m. Carter also announced details of the fundraising momentum since his decision to enter the race less than 30 days ago. He has raised $30,000 in his first month. During the press event, Carter was joined by Atlanta Civil Rights Attorney and Community Organizer, Gerald Griggs, Attorney, James Haug and his wife, Emily, and Former Dean of Florida A&M University's School of Journalism and Graphic Communication, Ann Wead Kimbrough. His campaign also launched an official website, social media handles and video on his intention to run.

Carter, a husband, father and Owner of Carter Media Group LLC, a public relations firm focused on driving change in marginalized communities, is a proud resident of Sandy Springs. He understands the nuances of government, skills he gained as the youngest person to ever lead the District Attorney's Public Affairs Office in Fulton County. The former journalist who was raised by a determined single mom, is running a campaign that reflects the growing diversity of Sandy Springs, and a desire to see more integrity and transparency in city government. "My mother worked tirelessly to provide a better life for me and my brothers. As a husband and a father, I want to make Sandy Springs a better place to live, not only for my family but for you and yours. We all deserve better and I'm ready to put plans into action." Carter is committed to leading a city that values the voices of its residents and is affordable for first responders, teachers and working families. The mayoral seat in Sandy Springs is currently held by Rusty Paul.

A city with big challenges deserves bold leadership and Carter believes now is the time for a change as the city works to address its water woes, tackle its COVID-19 recovery efforts, and fulfill the need for more transparency, integrity and accountability in local government while meeting the needs of all citizens by fast-tracking its diversity and inclusion initiatives. According to Campaign Strategist and Civil Rights Attorney, Maria O. Banjo, Carter is the right person to move Sandy Springs forward, “Dontaye is a strong and compassionate leader who has made it his life’s mission to give a voice to the voiceless. From his days as a journalist to his more recent work alongside Ahmaud Arbery’s mother and the survivors of R. Kelly, he has always stood up for what’s right and I have no doubt that he will do the same for the people of Sandy Springs.”