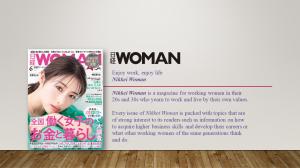 Nikkei Woman and the Nikkei Womenomics Project of the Nikkei Group announced the 2021 results for the “100 Best Companies Where Women Actively Take Part.” 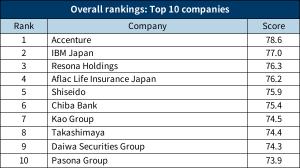 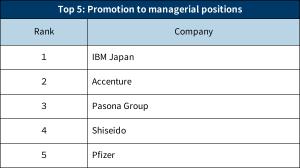 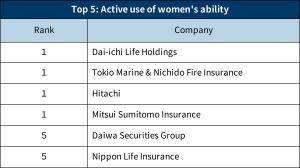 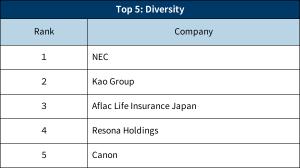 TOKYO, JAPAN, June 14, 2021 /EINPresswire.com/ — Nikkei Woman, a women's career and lifestyle magazine published by Nikkei Business Publications, conducted the "Survey on Female Workers' Workplace Opportunities" together with the Nikkei Womenomics Project of the Nikkei Group, and it announced the 2021 results for the “100 Best Companies Where Women Actively Take Part." The overall ranking, which is based on the survey responses of 522 companies, was unveiled in the June issue of Nikkei Woman. The survey has been conducted irregularly by Nikkei Woman since its launch in 1988, and the 2021 version was the 19th such survey.

Based on the two perspectives of how female workers are motivated and how they are treated and/or appointed, the survey measures the present state of how women's abilities are utilized in the workforce using four categories. These are: 1) promotion to managerial positions, 2) active use of women's ability, 3) work-life balance and 4) workstyle diversity promotion. The measurements are then scored, deviations calculated from the total scores are compiled as overall scores and rankings are arrived at accordingly. A summary of the survey results is given as follows.

Accenture came in first place in the overall rankings this year. (It had placed second in the 2020 overall rankings). The company has been promoting the active involvement of female employees since 2006. Its own workstyle reforms that started in 2015 brought synergistic effects, and the ratio of female employees increased, driven by correction of long working hours. The number of females in managerial positions has steadily grown: as of December 2020, females in managerial positions and executive positions accounted for 18% and 17% of the total, respectively, compared with 15% and 8% in 2017, respectively. Accenture was ranked in second place for the promotion to managerial positions category.

Along with the overall rankings, rankings in four specific categories are compiled. Evaluated factors and the top five companies in each category are as follows.

IBM Japan came in first place in the rankings. With its successful program for the development of female managerial positions, 50% and 25% of the participants in the programs in 2019 and 2020, respectively, have been promoted to managerial positions (as of January 2021). The percentage of board-member-level positions held by females increased to 20％ (whereas it had been 18％ in 2019). The number of female employees in board-member-level positions reached a record high of 51. Accenture, ranked in second place, prepares a human resource development plan designed for each female employee who is an executive candidate, where their superiors support their promotion. As of December 2020, females held 17% of executive positions (versus 8％ in 2017). The figure for managerial positions was 18％ (versus 15％ in 2017). Pasona Group came in third place, with the figures for females in managerial positions and female board members being 39％and 36％, respectively.

Dai-ichi Life Holdings, Tokio Marine & Nichido Fire Insurance, Hitachi and Mitsui Sumitomo Insurance tied for the top. Dai-ichi Life Holdings started a training program for female managerial candidates in 2015 and has subdivided the program since 2020 to strengthen human resource development. Tokio Marine & Nichido Fire Insurance achieved the target of having “the figure for females in pre-managerial positions (equivalent to assistant manager) exceed 50% by the end of FY2023” in April 2020. Hitachi achieved its target of “800 females in managerial positions in Japan by the end of FY2020 (or double the number for FY2012).” Mitsui Sumitomo Life Insurance has been working on promoting the active participation of female employees since 2006 and has enhanced its training program by position.

Nippon Life Insurance, ranked in first place, reduced average monthly overtime working hours as of March 2020 by 18% compared with FY2016. By increasing usage of annual leaves, the leave usage rate rose to 70%. The paternity leave usage rate was 100% for eight consecutive years from FY2013 to FY2020. Sumitomo Life Insurance, ranked in second place, has been working on work-style reform since 2017, and the total working hours as of March 2020 was reduced by 11.6% compared with FY2016, due to reduction and efficiency improvement of existing operations and review of the evaluation system (with introduction of productivity assessment on a per-hour basis). It achieved a 100% paternity leave usage rate in March 2020. Chiba Bank, ranked in third place, added time management to the personnel evaluation items with the aim of boosting employee awareness of work-life balance. It has been reflecting the opinions and requests of employees among its measures and has implemented approximately 60 measures, such as leave systems for morning sickness and fertility treatment.

Category 4: Diversity
Diversity is evaluated by female employee ratios and retention rates, involving factors such as years of service, as well as employment rates for disabled employees and measures to promote understanding of LGBT issues.

These rankings gave higher evaluations to the companies that have enhanced support systems, including measures and expanded support systems for work-life balance, in order for everyone to be able to work longer regardless of gender, age or disability. NEC, ranked in first place, has almost no gender differences in terms of average age and average years of service of full-time employees, with a high retention rate for newly graduated employees three years after joining the company (93%). Kao Group, ranked second, has established a childcare support system, and it became normal to continue working after childbirth in the mid-1990s. In its major group companies, 54% of full-time female employees are married and 46% have children. Working mothers account for 53% of females in managerial positions. At Aflac Life Insurance Japan, ranked third, 51% of female full-time employees are married and 36% are working mothers. Its turnover rate of young female employees has improved due to diversification of work style, such as with teleworking.

Outline of survey
The survey was conducted by Nikkei BP Consulting between January and mid-February 2021, targeting 4,468 leading Japanese companies, most of which are listed on the Japan Stock Market. There were valid responses from 522 companies. The questions in the survey and the evaluation method were established by judges (Ms. Nami Otsuki, Professor, University of the Sacred Heart; Ms. Mariko Kono, CEO, Carian Inc.; and Ms. Emiko Takeishi, Professor, Hosei University) and the editorial department of Nikkei Woman.