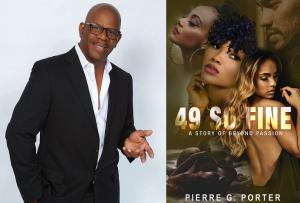 Love Beyond Passion. Romance Beyond Words.

PHILADELPHIA, PA, USA, July 28, 2021 /EINPresswire.com/ — Arthur C. Morton is a successful businessman, who has worked in the commercial and investment management real estate industry for many years. Additionally, to his credit, he has been socially conscious working on sustainable energy ventures before it was popular to do so.

Throughout his career, Morton has built a comfortable lifestyle, one like his parents worked hard to provide him and his siblings during his life growing up in a small city, Coatesville, PA. Now he resides in Philadelphia, a city that captured his interests while attending Temple University where he earned his business degree with a concentration in economics and finance. There in Philly, he fashioned a life that afforded him the opportunity not only to construct a successful business, but also to begin writing and ultimately starting his publishing company and film development entity, Locust1016 Publishing and Films. “I wanted to do something that would create opportunity for others. It’s my business background that prompted me to see where there was a need.”

When asked why he waited until this season of his life to write and take on the literary world, Morton explained that as a life-long entrepreneur, he understands that being attentive to detail and to one’s surroundings is crucial to success. Inspiration, though, is equally important, and it was children that provided the initial inspiration that prompted him to put pen to paper, the results of which amounted to him becoming an award-winning children’s author. When asked how was it possible to have such success as a new author, Morton replied, “I am not entirely sure, but I wrote about what mattered to me, and I endeavored to be honest, authentic, and challenging.”

Then inspired in part by his love for Philly, a hotbed of great culture, food, and music, Morton decided to turn the corner and move into romance. It was then that Pierre G. Porter, his pseudonym for "49 So Fine", was born, allowing him to write in a new direction and with a new voice to speak on another one of life’s challenges. Morton did not just take on that new challenge of writing about love and romance as a fluke. Rather, he sought to open a door and to provide a platform for others to explore and experience what it means to pursue not just any kind of love, but a love beyond passion in an imperfect world as imperfect men and women.

Through Harold Longston, the novel’s main character, we experience Pierre G. Porter speaking about romance from a grown man’s perspective, indeed a man’s-man’s perspective, with all the blemishes, bruises, complications in a man’s life. The truth about life and love of a man in the modern world is embodied in Harold Longston’s pursuit of love beyond passion. "'49 So Fine' tells a story of the sex, intimacy, intrigue, mystery and drama” Longston experiences, and Porter invites us, the readers, to accompany Longston on a riveting and revealing roller coaster of a journey.

As the true storyteller, Morton’s interest in prose and poetry and his life-long love of music converged to awaken a unique voice that held its story until the novel’s characters started to “speak to me and tell me their stories. Harold Longston started to speak first and all the friends and women and deals and mistakes he made came spilling out. A lot of people have said to me that the novel reads like a movie.” One of those characters, readers will agree, is something fresh and new. It is the lyrical way that the author uses music as a muse and not just as background references or side notes. “Jazz is the music of life, and it is definitely woven throughout the book, just like Philadelphia itself.”

How does a man who has been steeped in business ultimately take on the challenge of writing a romance novel some may ask. Morton said, “So many people talk now about romance like it is about partnership. If you want partnership, go into business. Romance is so much deeper than partnership. Romance is love beyond passion. It’s about looking into your life and letting someone in, all the way in, and examining yourself.” 49 So Fine is not just about the journey of some young man trying to find his way around love and life. It is a novel about a grown man dealing with his stuff and unpacking it his way, right or wrong, in pursuit of something greater than himself.

When asked how much he and the lead character are alike, Morton offered, “They say that there is a bit of truth in all fiction a writer writes. Harold is a man on a journey. He has lived a full life, but he is still searching for something more and for someone to share it with. That’s why I think so many men will relate to "49 So Fine". It’s about being real about life and choices. That’s why I think a lot of women will relate to it as well, if they’re honest.”

"49 So Fine" is a scorching hot romance, ripe with good sex, bad choices and a man who isn’t just looking for fortune, fine wine, or another trophy. This man is in search of his soulmate, and he’s digging deep into his soul to see what he might have missed along the way in hopes of finding what he desires most now in his life before it is too late.