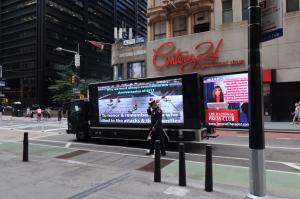 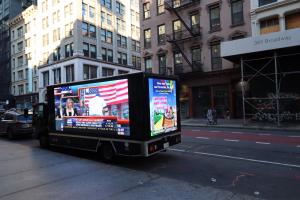 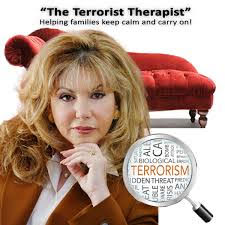 NEW YORK, NEW YORK, UNITED STATES, September 14, 2021 /EINPresswire.com/ — On September 10th and 11th, 2021, if you were near Ground Zero and the National 9/11 Museum, you would have seen a Mobile Billboard Truck playing a music video that brought many people hope and healing, courtesy of Carole Lieberman, M.D., M.P.H., a board certified psychiatrist, internationally known as The Terrorist Therapist®.

Dr. Carole Lieberman, Terrorist Therapist ® said "The reason I created a music video and had it driven around NYC was to honor victims, their families and those who sacrificed as first responders and military. So, it was heartwarming to see so many watching it and taking photos in front of it".

September 11th, 2001 changed Dr. Carole’s life. Born and bred in New York City, Carole says her heart has remained there. So, on this tragic day, she asked herself how she could best help people – with her background as a psychiatrist, TV news-talk commentator and author – to cope with terrorism: the memories of 9/11 and the ongoing threat of terrorism.

Since then, she’s written two award-winning books – including her latest, "Lions and Tigers and Terrorists, Oh My! How to Protect Your Child in a Time of Terror "- the first and only book about terrorism for kids (and their parents and teachers); hosting a weekly podcast called "The Terrorist Therapist Show," doing countless media interviews, speaking engagements and more. For the 20th Anniversary, her gift to New Yorkers and all Americans was a music video that she hopes will stir everyone's hearts, and provide hope and healing.

Carole Lieberman, M.D., M.P.H. is a board-certified Beverly Hills psychiatrist and author of two award-winning books on terrorism, Coping with Terrorism: Dreams Interrupted, and Lions and Tigers and Terrorists, Oh My: How to Protect Your Child In a Time of Terror.

She appears on top TV shows – from Oprah to FOX News, CNN, HLN, Today Show, Good Morning America, ET, Access Hollywood and more. Dr. Carole was trained at NYU-Bellevue and at Anna Freud's London Clinic. She has served on the Clinical Faculty of UCLA's Neuropsychiatric Institute for years.