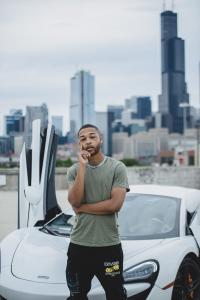 LOS ANGELES, CA, UNITED STATES, September 17, 2021 /EINPresswire.com/ — (Los Angeles, CA) September 17th, 2021 – Recording artist Leol's latest track, "Move," is available on major platforms. Reminiscent of a Drake and PartyNextDoor collaboration with Wizkid vibes, "Move" is infectious with a catchy hook destined to get your body swaying to the music. Listeners will be uplifted by the upbeat lyrics infused with a variety of melodies.

Produced by Blindforlove, music video director and recording artist from Chicago, Illinois Leol's single, "Move," hits differently, magnetizes listeners with its infectious harmonies, and delivers refreshing tunes by combining R&B and pop sounds. His music is unpredictable and enticing, centering around themes of love and infatuation while inviting listeners to a blend of seductive lyrics.

"Move" is available on major platforms.

Leol likes to play survival horror games like Left 4 Dead, Alien Isolation, Dead by Daylight, or Resident Evil 2 Remake when he is not recording. As a highly acclaimed producer with an upcoming single scheduled for release in October entitled "Savages," Leol's original music, whether dancehall, dark and moody or a cultured beat, proves that he is the total package and on pace to create waves in the music industry.